APPLY TO BE PART OF THE 2020 YOUTH COMMISSION NOW! moultonnorthants-pc.go…

The History of the Village Name

The derivation of the name 'Moulton' is thought to be "town of the mill", or perhaps either "Meleton" meaning protected town because Church, Manor House and Castle were within bowshot; or "Muletown" because it is thought the Romans bred mules for transport purposes. In the Domesday Book of 1086 it was spelt "Moltone". The oldest building in Moulton is the Parish Church which was constructed in stages between 1250 and 1422 on the ruins of earlier church structures. The earliest Church building was erected in the late 7th Century by monks from Brixworth, but this wooden structure was burnt down by invading Danes as was a small stone Church built in Saxon times. Some carved saxon stones remain being built into the present building. A remnant of the old Saxon Cross remains inside the present Church.

People have lived in this place for thousands of years for remains of Iron Age and Roman habitation have been uncovered in Thorplands, Moulton Park, and Pitsford Road areas of Moulton. Moulton Park was at one time a Royal Hunting Park, first mentioned as such in 1201. It was used for hunting, and for supplies of timber and food when King and court were lodged in Northampton Castle. Parliament met in Northampton in those times. During the same period of time Moulton had its own castle and manor house lying to the north of the church. It also had a brief period of fame as a spa when the local chalybeate (iron rich) water became a sought after remedy for ills.

For the most part of its history, however, the village has been an agricultural community with the local women engaged in lacemaking. In the 19th century and early 20th century the closeness of Northampton with its boot and shoe industry attracted Moulton menfolk who travelled into jobs there. Northampton industry and commerce now provides a large proportion of villagers with jobs, although the Moulton Park Industrial Estate and Thorplands Industry could perhaps still be considered part of 'greater Moulton'. 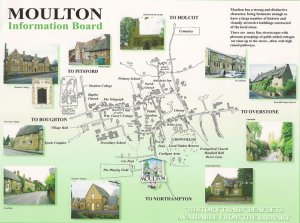