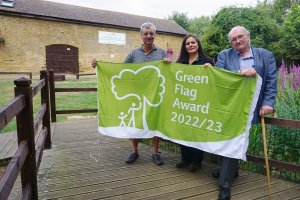 Green Flags have been raised above four parks managed by West Northamptonshire Council (WNC) this month after they retained the international mark of quality.

Daventry Country Park, Abington Park, Bradlaugh Fields and Delapre Park have all retained their Green Flag Awards - recognised as the benchmark for the management of recreational outdoor spaces around the world.

Cllr Phil Larratt Cabinet Member for Environment, Transport, Highways and Waste, said: "The connection between good open spaces and wellbeing is clear and we state the desire for high-quality parks plainly in our corporate priorities.

"On behalf of residents I'd like to thank all the people working hard to maintain our parks including council officers, park rangers, contractors, the Community Payback team and the many community volunteers who show real passion and love for their cherished green spaces."

Bradlaugh Fields in Northampton was first given the award in 2006 and again in 2020 and 2021, following a community effort to introduce measures to improve biodiversity and conservation practices at the former golf course. Abington and Delapre parks, also in Northampton, have retained their awards for the ninth and tenth years in a row respectively, recognition of their consistently high standards of upkeep and community involvement. Daventry Country Park has seen extensive improvements to its paths, pier, play area and visitor centre in recent years.