West Northamptonshire gets winter ready as gritters hit the road 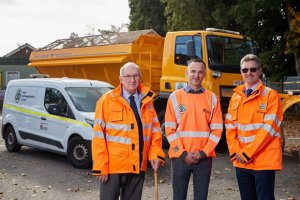 West Northamptonshire Council is getting ready for harsher weather conditions as Kier Highways, the council's highways provider, deploys its fleet of gritters to take on precautionary gritting routes.

The contractor activated winter working protocols in mid-October, with the season set to run through to April next year.

The gritters, which are powered by sustainably sourced Hydrotreated Vegetable Oil (HVO), will cover 1102 miles (2473km) of the councils' road network - which is the distance of driving from Northampton to Venice.

The Council has reserves of 5,500 tonnes of salt, with nearly 900 grit bins across the region filled for use on public roads and footpaths.

"With temperatures due to drop in the coming weeks, we are working with Kier Highways to ensure that we are prepared for our winter season. We have ensured our salt stocks are high, and that we have all vehicles and our brilliant drivers ready to dispatch.

"We are committed to working with Kier Highways to make West Northamptonshire's roads as safe as possible so that people can travel with minimum delay and disruption, whatever the weather throws at us this winter."

The fleet of gritters uses HVO with immediate effect, which reduces the carbon produced from combustion engines by up to 90% compared to diesel. The move demonstrates Kier Highways and WNC's shared commitment to achieving net-zero carbon emissions by 2030.

Enhanced weather forecasting and temperature readings will be taken via weather stations and sensors set out along West Northamptonshire's roads, with updates sent every 15 minutes.

Through route-based forecasting, roads will be treated if the temperatures are forecasted to drop below 0.5C.

The gritters are also fitted with advanced GPS technology which requires only one person to operate the vehicle in clear conditions, by accumulating route data and reporting back to the office to ensure that works are safely delivered.

John Coombes, general manager at Kier Highways, calls for drivers to be careful on the roads: "The UK faces increasingly unpredictable weather year-on-year. Even once a road has received a gritting treatment, the salt requires activation from the movement of vehicles – so road users should remain vigilant.

"With crews on standby 24/7, we're confident in the steps that we've taken to be winter-ready, and we actively encourage feedback from the community to help us to continue to deliver a resilient and reliable service.

"Through close collaboration with WNC, we're pleased to deliver an efficient and value-for-money service, with sustainability in-mind."

As stocks run low, people can also report bins that need refilling via the Street Doctor service at http://www.westnorthants.gov.uk/roads-and-paths/grit-bins

People can keep up to date with highways and travel news for West Northamptonshire Council highways on Twitter and Facebook via @WNHighway. To learn more about Kier Highways, visit http://www.kier.co.uk/expertise/highways